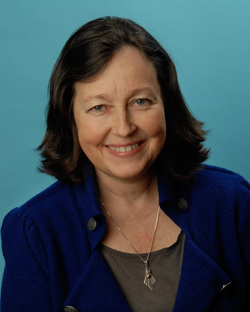 Ann Ritter is a Kundalini yoga teacher, a yoga therapist and a Thai yoga bodywork professional. She formally founded her practice, The Human Nature Bridge, in 2003.

Ann found her way to yoga and related therapies at about the same time she became pregnant with her first child in 1986. She studied and sampled Hatha yoga from late 1986 through mid 1989, when she took her first Kundalini yoga class in Atlanta. A diligent student of Kundalini since that time, Ann also sampled workshops and teaching styles from Kripalu, Polarity and Kali yogas during the mid and late 1990s, and received an associate polarity practitioner certificate from the Atlanta Polarity Center in 1996. She has taken three levels of Kundalini teacher training: from Mukta Khalsa in Atlanta, and 200-hour and 500-hour certification from the Kundalini Research Institute (KRI) in Espanola, NM.

Ann was led to broaden her practice and her own personal healing in 2002 to include yoga therapy and other links to wholeness. She began studying Thai yoga bodywork in 2002, and traditional yoga therapies in 2004. Ann continues to work toward her 1,000-hour certification in yoga therapy from the Integrative Yoga Therapy Institute and to pursue a doctorate in human systems from Fielding Graduate University.

Among other teachers and influences to which Ann is indebted: Barbara Johnson and the OpenDoor of Asheville, NC, the late Yogi Bhajan of the 3HO/KRI organization in Espanola, NM; Jaya Devi Bhagavati of the Kashi-Atlanta Ashram; the late Ma Jaya Sati Bhagavati of Kashi Ashram, Sebastian, FL; Kam Thye Chow, formerly of the Lotus Palm School, Montreal, Canada; Joseph and Lilian Le Page of the Integrative Yoga Therapy Institute; and the late Mukunda (Tom) Stiles, of Novato, CA.

Ann is married and lives and works in Decatur, Georgia, in the Oakhurst neighborhood. She has two children, Ben, born in 1987, and Susannah, born in 1993. She is active with the Atlanta Friends Meeting (Quakers). A sometimes actor and dancer, she sits on the board of directors of Beacon Dance, Decatur, and serves as one of the facilitators of Fieldwork, an artist development network sponsored in Atlanta by Emory University’s dance program and CORE Dance. She “treads the boards” whenever she has time and opportunity. She also writes and, when the muse smiles on her, publishes non-fiction, fiction and poetry.

Ann Ritter is certified by the International Kundalini Yoga Teachers Association, and completed her teacher training in Atlanta with Mukta Khalsa and in New Mexico with the late Yogi Bhajan. She also has taken classes in Kali, Hatha, Kripalu, Polarity and Integrative yogas over the past 24 years. Her style reflects heavily her Kundalini training but also brings to bear the body-mind knowledge she has learned as a student of polarity and yoga therapies, and other yoga systems.
Web Solutions | Azalea Creative